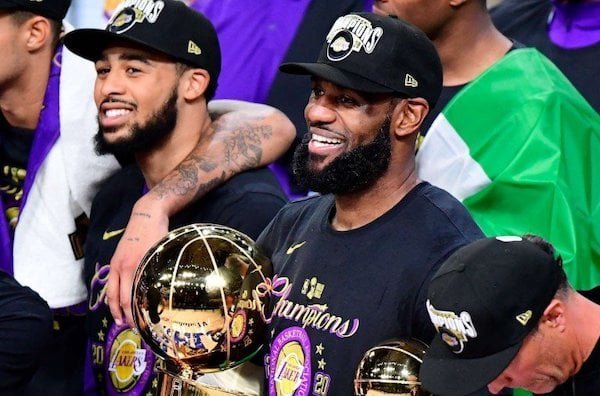 Lebron James has never been shy about admitting he holds grudges. Chris Broussard joined FS1’s First Things First this morning and said that James, a player legitimately discussed as one of the best to ever play in the NBA, is known to make lists of those that have wronged him or doubted his greatness. That is why it shouldn’t be surprising that James told Rachel Nichols “I want my damn respect” on Sunday night when claiming his fourth NBA Championship with his third different team.

Broussard said the message was likely largely driven by media narratives. James was second in this year’s NBA MVP voting. He was nowhere near winner Giannis Antetokunmpo, who scored 84% of the first place votes.

James ire may also have been driven by recent comments from three high profile NBA analysts and former players Broussard speculated. In recent weeks ESPN’s Paul Pierce and Charles Barkley and Kenny Smith of TNT’s Inside the NBA all said they would not consider James amongst the five best NBA players in history.

It’s easy to point the finger at the media when an athlete talks about not getting enough respect, but Chris Broussard, who admits to being part of the 84% that favorited Giannis’s performance in the regular season, says that James’s message was likely aimed at his peers.

“I think that LeBron was taking a subtle, gentle shot at the haters. Look, just a week ago, Kyrie Irving, who LeBron helped win or led to a championship, said ‘I didn’t trust him to take the last shot at the end of a game.'”

Certainly LeBron didn’t take kindly to a former teammate saying such a thing, but that wasn’t the ultimate source of LeBron’s ire according to Broussard. He speculated that LeBron might have been verbally subtweeting Kawhi Leonard, who not only turned down the opportunity to team with LeBron as part of the Lakers, but then built his own super team with the Clippers in the same building LeBron plays in.

“I know when LeBron talked to Anthony Davis, he told Anthony Davis ‘Look, if you come to the Lakers, we’re gonna win a championship and your NBA platform and legacy will change and grow forever.’ And I know he told Kawhii the same thing, and Kawhii not only defied him, but actually challenged him. Went to the little brother down the hall and then mad commercials saying ‘I’m the king of LA!'”.

The media loves to pick apart LeBron James. This NBA season, Lebron James seemed to be under an even more intense microscope as blogs like Barstool and Outkick routinely took shots at him for the NBA’s business relationship with China. The premier of The Last Dance in April on ESPN reignited the LeBron vs. Jordan debate with critics claiming that the documentary proved James could never be on Jordan’s level.

According to Broussard, those things made for great stories and online debates. Ultimately though, they mattered more to fans than to Bron himself.

WCCO Brings Back The Sports Huddle

“The Minnesota sports-focused show returns after previously being hosted by the late Sid Hartman and Dave Mona for over 40 years.”

Audacy announced it is bringing The Sports Huddle back to 830 WCCO in Minneapolis, MN. The show returns on Sunday, Oct. 10, and is airing from 10 a.m. to 12 p.m CT on WCCO with hosts Mike Max and Pete Najarian.

The Minnesota sports-focused show returns after previously being hosted by the late Sid Hartman and Dave Mona for over 40 years. The new crew is bringing their flair to the Minnesota sports scene with big-name interviews and listener interaction.

“We’ve been discussing for a while a show that ‘reboots’ the heritage and equity of the old Sports Huddle while exhibiting a new energy and more expansive template for Pete and Mike to talk about all the various topics they’re passionate about,” said Brad Lane, Brand Manager, 830 WCCO. “We’re confident this new edition will help take this legacy brand to the next level while offering a unique and fresh outlook on the most relevant topics each week.”

Max has been with the station since 1998 and currently hosts his weeknight show Sports to the Max. He also contributes to The WCCO Morning News and started his career as an intern at WCCO-TV.

“Pete and I can’t wait to continue bringing what we grew up with to our audience,” said Max. “Sundays on WCCO have always meant entertaining and exclusive content.”

His athletic co-host, Najarian, played football at the University of Minnesota and was inducted into the program’s Hall of Fame in 1992. Najarian ended his career as Minnesota’s second-leading tackler and parlayed that on-field success into an off-field financial career.

“This show will offer listeners a fresh look at sports with straightforward comments and takes,” said Najarian. “We may even mix in some financials when it’s appropriate.”

A new era for The Sports Huddle begins in about two weeks.

”We want to grow this industry in a healthy way for the long term.” 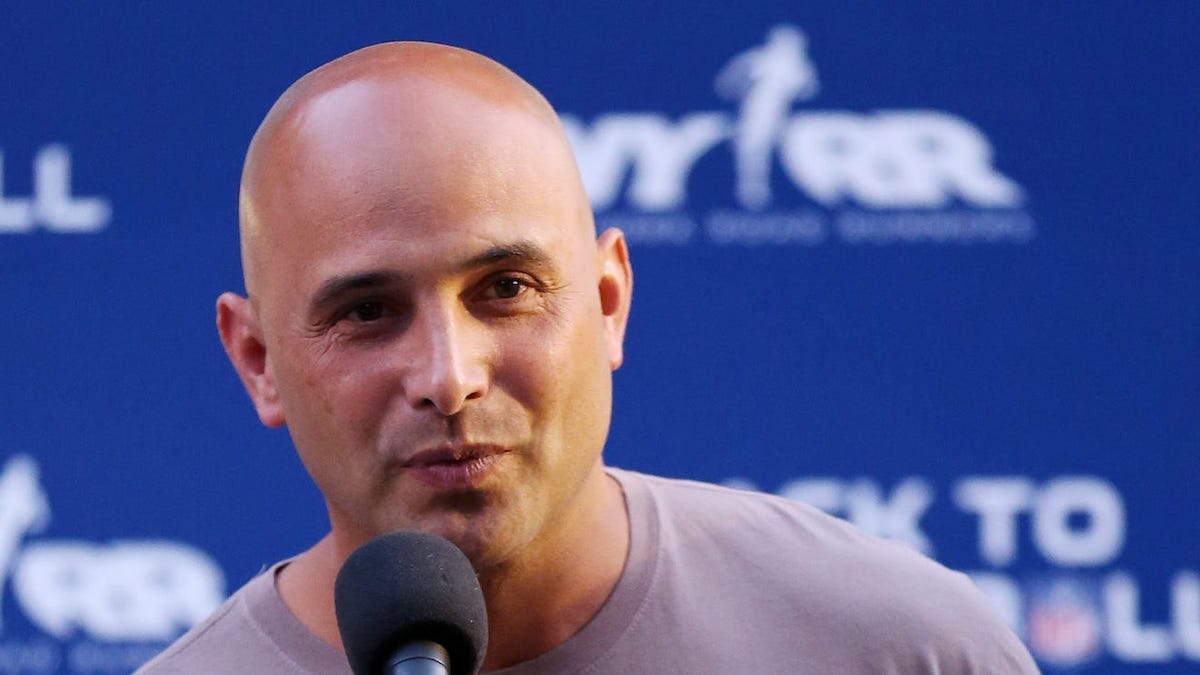 Fanduel recently announced that it is partnering with Craig Carton to be their first ever ”responsible gaming ambassador” for the company.

Over the weekend, Carton had the Chief Marketing Officer of Fanduel Mike Raffensperger on his gambling addiction show, Hello My Name is Craig, to speak on their mission with the partnership as well as why it was the perfect partnership for both sides.

”What I have tried to explain to people is that there was a lengthy vetting period on both sides.” said Craig Carton about the partnership. ”Fanduel wanted to know who Craig Carton is, is he full of crap about his struggle with gambling, and ultimately what’s in it for Fanduel.” said Carton.

Raffensperger added that Fanduel wants to keep their consumers safe while using their product.

”We want to grow this industry in a healthy way for the long term,” he said. ”We understand that some people who use our product are going to have trouble using it responsibly, and it can really affect their lives.”

As to why Carton is the right guy for the role in the partnership, Raffensperger added ”I think what we recognize we needed is to add some humanity as to how we get this message across.”

Craig Carton notably has a long past with gambling. He ultimately served just over a year of his 3 year prison sentence for his role in a Ponzi scheme that saw him defrauding investors to pay back his gambling debts.

“He will help shape the company’s responsible gaming policy, play a role in FanDuel building AI that can spot problematic gambling patterns, and host events in which he will help younger bettors understand what an addiction looks like.”

FanDuel announced yesterday that it has hired its first ever “responsible gaming ambassador”. WFAN’s Craig Carton has agreed to take on the role. He has been open about his gambling addiction and advocated for those that believe they have a problem to seek help on air since returning to New York radio last year.

The content he creates for FanDuel will have a very specific focus. A press release says Carton will promote messages of “advocacy, prevention awareness and content development focused on the importance of wagering within limits”.

Craig Carton was sentenced to three years in prison for his role in a ponzi scheme to defraud investors of money they were told was being invested in tickets for resale. In reality, Carton was using the money to repay some of his gambling debts.

“My story and personal history with gambling has been well documented,” said Carton. “More than ever, I want to use my experience and platform to shine a meaningful spotlight on the issue of problem gambling. It was important to me that I find a real partnership with a company that shared my passion for this issue. It became clear FanDuel shared the same goals and was comfortable working transparently with me for the sole purpose of protecting people.”

FanDuel is planning to utilize Carton in a number of ways. He will help shape the company’s responsible gaming policy, play a role in FanDuel building AI that can spot problematic gambling patterns, and host events in which he will help younger bettors understand what an addiction looks like.

He will also create audio and video for FanDuel’s Play Safe Campaign. FanDuel will help Carton’s WFAN program “Hello, My Name is Craig” find a bigger audience. The show airs on weekends and features Carton discussing his addiction and offering advice to others seeking help.

“We are absolutely thrilled to partner with Craig to place even more emphasis on responsible gaming behaviors,” said Mike Raffensperger, FanDuel Group’s Chief Marketing Officer. “Everyone at FanDuel understands the importance of protecting our customers who are also our family, friends, neighbors and community members. Craig’s powerful personal story will help fuel our mission of making sure no bet placed results in hurting a loved one.”