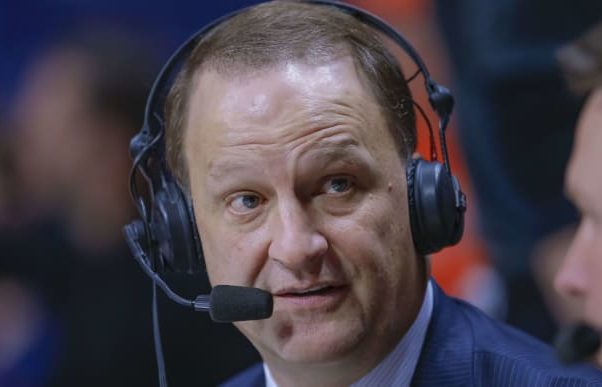 As Sean Keeley of Awful Announcing details, it started when Duke lecturing fellow Nathan Kalman-Lamb called out a number of college basketball analysts who were critical of Johnson’s decision to opt-out mid-season.

“Here are some more of the fine folks so unrepentant about the fact that their careers are built entirely on the unpaid labor of young people that they will also gleefully attempt to publicly humiliate them,” Kalman-Lamb wrote in a Twitter thread, citing Dakich, Jeff Goodman, Doug Gottlieb, Seth Davis and Jon Rothstein among others.

Dakich pushed back on the thought that college athletes are unpaid labor, writing “players get paid ..in cash ..a bunch.”

In addition to working for ESPN and hosting his own radio show on WFNI The Fan in Indianapolis, Dakich is a former college basketball player and coach who understands its infrastructure well.

After the two engaged on Twitter, Dakich noted “much more from me coming,” and ultimately blocked Kalman-Lamb, but not before others entered the conversation, including Dr. Andrew McGregor of Dallas College and historian Dr. Johanna Mellis who co-hosts a podcast on capitalist sport, labor, and justice.

Dakich continued to argue against the idea that student-athletes are wrongly compensated because of an unfair labor system within college sports.

It’s inarguable that college athletes give more to their school and sport than they receive in return, but should that make them exempt from critical analysis? Noting Duke has played better since Johnson decided to opt-out is not a damning accusation, it’s an obvious evaluation of an athlete who’s in line to land a contract worth more than $10 million later this year.

But most college athletes won’t be afforded similar salaries and the idea of education being fair compensation for their contributions is shameful. Those arguing against Dakich took it a step further, noting the education student-athletes receive is “less than optimal.” That’s where Dakich took a sharp turn, claiming it was “racist or sexist” to allege student-athletes are unable to receive a quality education even though the sport they play takes precedent.

Dakich also went down an odd path on his radio show last week after explaining the Twitter exchange to his listening audience. In the break-down, he mentioned a tweet from Dr. Mellis, a former Division 1 swimmer who suggested “let’s go at it in the pool.”

“I had somebody come at me. Buncha academics last night,” Dakich said on his radio show according to Awful Announcing. “Two guys and a lady, right? Two guys and a lady came at me. And they said, ‘well, you’re yelling at student-athletes while they’re being exploited’ or something, and I said, ‘look, maybe, but I…I was in the arena and you guys were sitting outside bitching. Now, remember, it was two girls…two men and one lady. Guess what that got called? Sexist. (Laughs) Be careful. I didn’t even realize, I just said bitching because it’s what people do. It’s what everybody does, everybody just bitches. But that’s sexist apparently because I said bitching and a lady was in the conversation. And I said outside the arena, and then she wanted to, quote, go at it in the pool. Well, if you go at it in a pool, that’s a public place and then I’m gonna have to get divorced, and then it’s just gonna be a problem.”

The pool comments from Dakich were a poor choice of words, especially coming from someone who claimed it’s sexist to question the quality of education received by student-athletes. According to Ina Kennedy of the Chatham-Kent Sports Network, Dakich also recited the spelling of Kalman-Lamb’s name, noted his Duke office hours and called him a “d-bag” to his radio audience.

Dakich is no stranger to controversy, his brash approach to media is part of what makes him a popular radio host, but that doesn’t excuse crossing obvious lines. In 2019, Dakich was suspended by The Fan’s ownership Emmis Communications for “a failure…on Dan’s part to adhere to the journalistic principles valued by Emmis.” He was also under investigation by Emmis last year when he threatened to “beat the hell out of every school board member” in response to a high school basketball coach getting fired.

As of Sunday, Feb. 28, Emmis has not publicly commented on Dakich’s latest hot water incident.

ESPN issued a statement saying that it is taking the incident seriously.

Dakich deactivated his Twitter account on Sunday morning but by that evening was back on the social media platform.

“David’s unique blend of wit and golf wisdom, and his experience from a lifetime in the game, really make him one of a kind.”

SiriusXM announced today that David Feherty, who has been entertaining golf audiences with his witty perspective on the game for more than two decades, is joining SiriusXM to launch a new weekly show.

Feherty will team up with fellow former pro and SiriusXM host John Maginnes for Feherty and Maginnes. The show will be on Monday evenings on the SiriusXM PGA TOUR Radio channel.

They will preview the new show this Wednesday at 5pm. The show officially starts in its new time slot on January 3rd, as the PGA TOUR season picks up steam with the Hawaii tournaments.

“I can’t wait to work with John Maginnes,” said Feherty.  “He is one of my favorite people and SiriusXM will be a really fun platform for us. The over/under on both of us getting canceled is about six weeks!”

The format will include long form interviews with personalities from the world of golf with storytelling to the listeners coming from the golf expertise of Feherty and Maginnes, who both had playing careers on the PGA Tour.

“David’s unique blend of wit and golf wisdom, and his experience from a lifetime in the game, really make him one of a kind,” said Scott Greenstein, SiriusXM’s President and Chief Content Officer. “SiriusXM is the perfect platform for his many great stories and the insightful and revealing conversations he’ll have with his guests.  We are thrilled to pair him up with John and bring together two terrific personalities who will deliver an entertaining, must-listen show for our listeners.”

Feherty spent time following his playing career at CBS and NBC as well as his own show on the Golf Channel.

Industry sources believe that crypto could grow into a $100 million dollar industry for sports television within the next year.

Industry insiders have believed for quite a while that sports betting was the future for sponsorship and advertisement revenue, but it appears that there is a new venture on the rise that is quickly surpassing it.

Crypto.com made a huge statement in purchasing the Staples Center in what will be known as Crypto.com Arena come Christmas Day.

SponsorUnited Founder and President Bob Lynch believes that there is no doubt that Crypto and Blockchain will far exceed sports betting as the premiere revenue money maker for the sports industry over the next decade.

“They’re essentially buying equity,” which would be particularly valuable in an industry that is still widely doubted, Lynch said on Crypto.com’s purchase of the arena. “The Lakers and Clippers have global exposure, media value and mentions that give instant brand legitimacy with top-of-mind awareness through national/global TV exposure,”

Crypto has already started to push its way into major advertisements for key events in the world of sports. Cryptocurrency exchange FTX purchased an ad in this upcoming Super Bowl, and already has the backing of the biggest star in professional football. Tom Brady has an equity stake in the company.

Crypto.com is already the sponsor of FOX‘s college football studio show, Big Noon Kickoff, on top of running ads during broadcasts of the game as well.

Industry sources believe that crypto could grow into a $100 million dollar industry for sports television within the next year. It seems that the possibilities are endless for crypto within the sports landscape. While sports gambling certainly isn’t going away from the public eye, it could be overtaken by crypto in terms of ad spending and sponsorship visibility very soon.

Colin Cowherd: Lincoln Riley At USC Is Good For Networks

“Colin Cowherd pointed out that when USC is a contender, LA watches.”

Colin Cowherd is a self-professed college football fan. When the sport is interesting, he talks about it. The sport may never be more interesting than when the coaching carousel is spinning.

On Mondy’s edition of The Herd on FS1 and FOX Sports Radio, Cowherd dove in on USC’s hire of Lincoln Riley. He says that it is good for college football that Riley left Oklahoma for Los Angeles.

“My phone blew up yesterday, not only because people know I’m kind of a USC honk, but network people,” Cowherd said. “They’re like ‘do you understand how big this is for networks?’”.

Colin Cowherd pointed out that when USC is a contender, LA watches. He noted that when USC lost to Texas in the 2006 Rose Bowl, ABC scored a 22.5 rating in the city.

“The networks want USC to be good. You know why? Because New York, DC, and Boston have never watched college football. Chicago does and LA does. So the Big Ten being good is good for college football TV ratings. But LA doesn’t watch college football anymore. They will now.”

As for the hard times USC has fallen on and been stuck in mostly since Pete Carroll bolted for the NFL, Cowherd is not particularly worried. He pointed out that Georgia, Alabama, Ohio State, and Notre Dame were all down before they hired the right coach. Programs at the blue blood level in the sport have a way of bouncing back quickly.

Network executives are hoping Cowherd’s assessment is correct. USC is the only brand on the West Coast capable of resonating on a national level.

The Los Angeles sports landscape has changed though. When USC was a celebrity program under Pete Carroll, the city did not have an NFL team. Now it has two. The Dodgers were not annual contenders in Major League Baseball. The Lakers had stars, but the Clippers didn’t. Now both do.

Does LA love college football enough for the Trojans to turn some heads in the city with the most stars in the sports world?